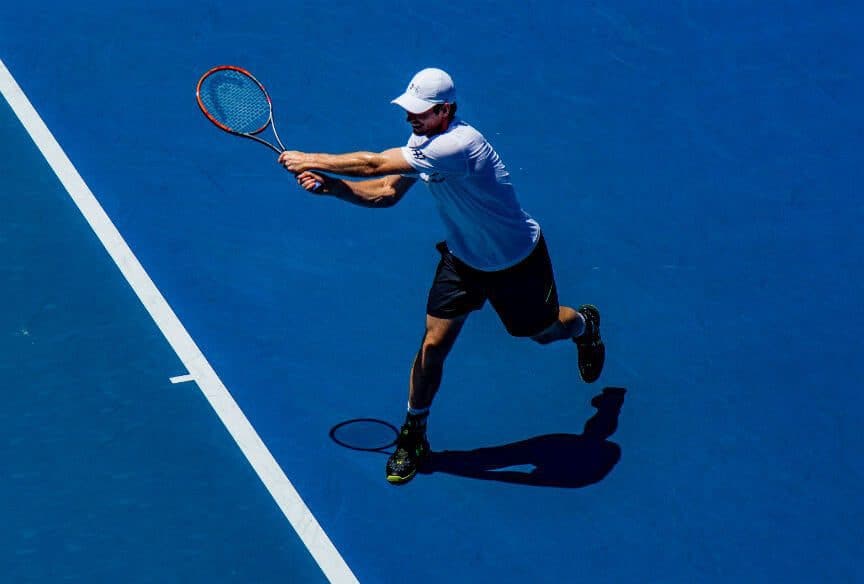 Pace is a term that is used extensively in tennis. You hear of players hitting with a lot of pace (aggressive hitters), or of no pace hitters (pushers) hitting the ball with very little pace. But what exactly is pace and how is it used in tennis?

Simply put, the term pace in tennis refers to how fast your shot travels after it leaves your racket. In other words, the ball speed. If you hit with a lot of pace, you are hitting the ball hard. If you hit with no pace, it means you are getting the ball back at a low speed. Pace can be used strategically during a match to control the tempo of play.

Pace is important in tennis because if you can master it, you can control the match. Players who are able to switch the pace of their shots during key moments in a match can gain an edge over their opponent.

A common strategy among no pace hitters, for example, is to hit with very little pace and then when their opponent gets too comfortable or when they are off-balance or out of position, blast the ball past them, either down the line or crosscourt.

Fast pace hitters, on the other hand, tend to not vary the pace of their shots as much. They typically like to hit hard and win points by outpowering their opponent. However, even hard hitters can benefit from mixing up the pace from time to time to throw their opponent’s timing off.

How and When to Use Pace

Generally speaking, as a player you want to be the one who controls the pace of a match. Typically, this means that you want to put your opponent on the defensive by hitting hard and keeping them pinned back.

By combining this with strategic placement, you can not only overpower them but also move them around the court to your advantage. This strategy is good in principle, but often it results in overhitting balls and making unnecessary unforced errors.

If, on the other hand, you alter the pace from time to time, you can throw off the timing of your opponent, keep them guessing on how hard and fast the ball is coming at them on your next move, and increase your shot percentage.

Let’s take a look at the technique for both approaches. First, we’ll discuss how to generate pace on your shots. Next, we’ll take a look at the opposite approach, taking pace off the ball to slow down the game in situations where you want to buy time or work off of the power of your opponent’s shots.

To generate pace on a tennis ball, you need to take a full swing using your body weight and stepping into the ball to generate power. Be sure to start with the racket back, head higher than the handle, and then follow a looping trajectory to generate the most amount of power.

The looping motion differs from a straight back approach in that the racket is brought back a bit higher. Then, as you initiate the swing your racket drops quickly. This initial drop helps create added momentum to the swing. The motion is then followed with a forward-upward swing (about 30-50 degrees upward) and contact is made in front of the body.

Contact in front is important for generating more power on the shot. You want to effectively go after the ball. Step into it, use your body weight, and swing through fully across your shoulder. Don’t let the ball bounce too high, get to it as early as possible.

This will give your opponent less time to set up and allow you to put more pace on your shots. It will also lessen the effect of any spin on the ball that your opponent may be using against you. Hitting early allows you to control the tempo as well.

In addition to pace, you want to use topspin to help keep your shots in. If you hit your shots too flat, they will tend to go long. Topspin will take some pace off your shots, but the ball will tend to bounce more aggressively towards your opponent.

Topspin is achieved by swinging the racket up at an angle on contact. You also want to keep your racket face more closed and lead with the top edge of the racket. You can get more detailed information on the technique from the article on how to hit a topspin tennis shot.

You will need to balance pace with topspin on your shots since they work together but produce different results. Heavy pace is all about power and speed. Topspin helps keep powerful shots within the court but decreases the pace of the shot.

Remember, pace refers to ball speed. Topspin is forward ball spin. The two can be very effective in combination, but it’s critical to maintain a balance. Shots with heavy pace but little spin will tend to carry long. Shots with large amounts of topspin and little pace will tend to float high.

Taking Pace Off the Ball

If you hit with a constant pace, that is only hard shots, your opponent will eventually adjust. This will allow them to more easily begin to exploit your shots. If, on the other hand, you vary your shots so that you introduce some slow pace balls from time to time, your opponent will be thrown off and have to guess at your next move.

This has certain advantages. By feeding off the pace of your opponent, you use up less energy to create your shots. Over a long match, this could mean that you are the one who ends up with more energy and stamina during the final, deciding points.

To take pace off of your shots, you are simply going to slow down your swinging motion. The technique should be similar, though the follow-through will tend to be shorter given the decrease in momentum. You will need to rely more on your bodyweight and less on your arm to execute the stroke.

Not only can you use the power of your opponent’s shots, but you can also move them around the court, back and forth. They will be consuming more energy to produce their shots, and by moving them around you also tire them out physically.

This is why no pace hitters can be extremely effective. No pace hitters are masters at forcing their opponent to expend as much energy as possible on their shots, while they themselves use up as little energy to execute their shots.

If you’re a power hitter, you know how frustrating it is to play against a no pace hitter. But rather than allowing a no pace hitter to dominate you, it’s important to realize that you can control the pace on your own shots. You have the ability to move your opponent around and to increase or decrease the pace of your shots as needed.

In addition to feeding off the pace of your opponent, another tactic at your disposal is the use of underspin. Underspin, also referred to as slice, tends to slow down the pace of a shot. Because of the backward direction of spin, slice shots will tend to float more resulting in a slower pace.

When they land, slice shots tend to bounce viciously away from your opponent. This makes returning the ball more difficult for them and at the same time buys you more time on your next shot. In order to make the best use of this added time, set up quickly once you know which way the ball is coming back to you.

To create underspin on a ball, the racket face should be open, that is tilted upward at an angle. The swing motion is high-to-low with a forward follow through back up again. For more information on the technique, check out the article on how to hit a slice shot.

Underspin is a technique that you can use intermittently. It will probably not make up the majority of your shots, but it can be thrown in the mix from time to time to keep your opponent honest, much in the same way pace can be adjusted from time to time.

Pace in tennis can be an important factor in your performance results. Hitting with heavy pace can allow you to overpower your opponent. Slow pace can be effective as well in situations where you need to buy more time or when you are playing against a stronger, more powerful hitter.

The most effective use of pace is variety. While players tend to gravitate to one extreme or the other, it’s beneficial to mix things up from time to time. You want to always keep your opponent guessing and on their toes. Varying the pace can achieve just that.

The best players in tennis know this. Just when you are getting comfortable with their rhythm, they will throw in unexpected shots. A hard hitter will suddenly hit a shot will little pace to make you miss. Maybe they introduce a slice or drop shot to get you away from the baseline.