The overhead smash is typically used to put away your opponent on a high ball. You may be up at the net when executing the shot or you may be set up further back following a defensive lob shot from your opponent. Regardless of initial positioning, the technique is the same.

The overhead smash technique is similar to a serve, but with a shortened backswing. You want to set up right away with your non-hitting shoulder facing the net and body turned sideways. Sidestep back to adjust your positioning. You should be holding the racket up behind you and towards the side. Your non-hitting arm should be pointing up at the ball for guidance. Strike the ball just in front of you in a downward motion and follow through fully.

While the shot can be executed as a backhand smash shot, it’s best to position yourself to hit it on the forehand side. This will allow you to generate more power. The backhand side is only used as a last resort and is more of a defensive recovery shot.

Use the Continental Grip

Since an overhead smash is similar to a serve, you want to use the same grip on the racket as you would on a serve. Start out with a continental grip since this will best position the racket head during the motion of the stroke.

Similar to a serve, you want the racket head to make contact with the back of the ball. The continental grip will provide natural positioning for you to be able to strike the back face of the ball. See the article on how to grip a tennis racket for more information on grip positioning.

Start in a Ready Position

Before your opponent initiates a lob, you want to be in a ready position. You don’t know at this point what shot your opponent is taking, so you should be facing the net with knees slightly bent, body leaning forward, and racket in front of you.

In all likelihood, you will be positioned near the net. Your opponent will be trying to beat you with an overhead lob shot to catch you off guard. However, if you are positioned closer to the baseline the setup should be exactly the same.

One thing to point out is that the sooner you are able to get back to defend the lob, the better. Try to anticipate if possible by analyzing the angle of your opponent’s racket or any other cues that you can pick up that tip you off.

If you play against someone who likes to lob a lot, that should give you a pretty good sense when you are up at the net that they will lob you. In this case, start to move back before the ball even bounces on their side. If anything, this will make them think twice about lobbing you on the next opportunity.

This video covers the overhead smash technique from grip to follow-through:

Some players will point up with their elbow rather than with their hand. If you prefer this approach, that’s perfectly fine. You want to use your arm as a guide, so whether you choose to point your hand or elbow is more a matter of preference.

The only difference in the positioning of the racket relative to a serve is that it will be positioned a bit more to your side. You don’t necessarily want to go as far back as you would on a serve. The backswing should be shorter.

If you need to back up, you can take side-steps towards the baseline to adjust your positioning. If you start at the baseline and need to move forward, step into the ball and then set up on the forehand side to hit the overhead smash.

In situations where you need to cover a greater distance, you may need to cross-step rather than side-step. This will allow you to move either forward or backward more quickly.

A combination of the two is also possible so that you cross-step and then take small side-steps for final adjustment. As long as you don’t backpedal with your body facing the net, any of these techniques can work.

In situations where you get beat deep and you are close up to the net, you can turn around and run facing forward towards the baseline. This will allow you to get there more quickly since you can run forward faster than sideways.

However, you then have to turn to set up for the smash shot. Only use this in situations where you are beat deep into the back of the court and you know you will not get there using side-steps or cross-steps.

In situations where you need to retreat, regardless of whether it’s by side-stepping or by running back, you always want to back up just a bit further back than the ball. This will allow you to step into your shot in order to produce more power.

No Bounce vs One Bounce Overhead Smash

Each has its advantages. If you hit the overhead smash without a bounce, your opponent has less time to recover from the shot. This is the main reason you want to try to hit the ball before it bounces.

However, playing off the bounce is a bit easier to time, particularly on very high lobs. The ball will be dropping at a much greater velocity if the lob is hit very high, making timing the shot off the air difficult to do.

Once you are ready to initiate the overhead smash, set up with your feet at least shoulder-width apart for balance. Bend your knees slightly and position yourself so that the ball is just in front of you as you prepare to make contact.

Swing Down on the Ball 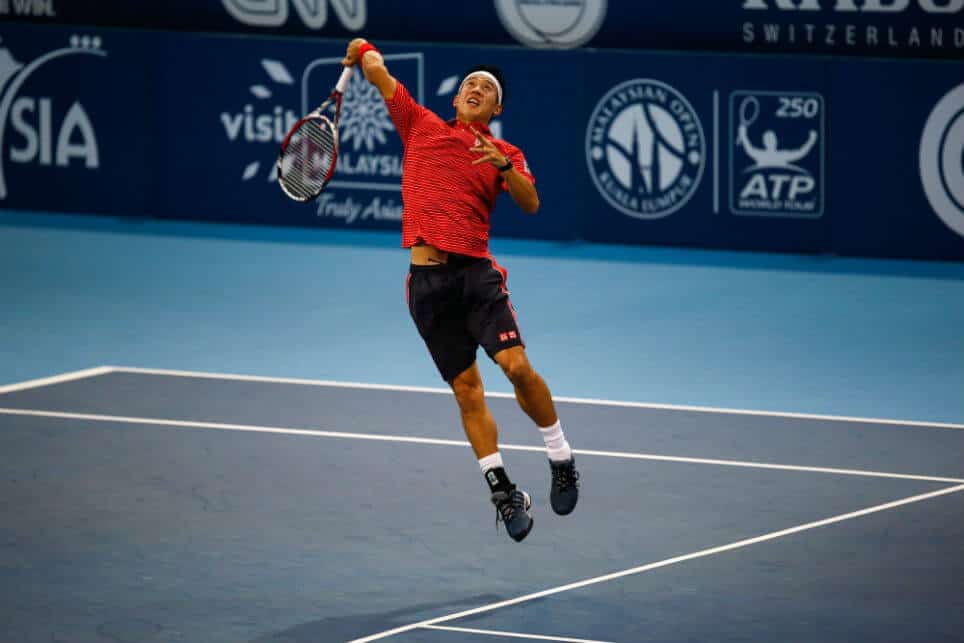 The overhead smash is executed using a downward motion. Since you will be striking the ball well above you, the downward motion serves two purposes: First, it allows you to keep the ball within the court boundaries. Second, it creates a high bounce on contact, making it more difficult for your opponent to reach the ball.

Keep Your Elbow Straight during the arm swing. The point of contact is in front of you above your head, and slightly to your side. As mentioned previously, you do not want to bring the racket as far back as you would on the serve.

If you are hitting the smash shot further back or close to the baseline, you may need to swing up a bit on the ball similar to what you would do on a serve. The greater distance means you can’t swing directly down on the ball otherwise it may end up at the net.

Don’t be afraid to swing up a bit if you are between the service line and the baseline. Keep in mind that you have added distance to get your shot in when compared to the serve. Rather than having to make your shot land within the service box, you now have an additional 18 feet to the baseline.

Remember that the smash shot is an offensive shot. You are aiming to finish off your opponent. Use the power and the leverage created by the extended arm swing to make the shot as difficult as possible for your opponent to return.

Usually deep, angled shots are most effective, but if your opponent is close to the net or positioned cross-court, you can hit your shot down the line as well for a winner. Just keep in mind you will have less distance to make the shot.

This is one of the reasons you want to try to aim your smash shots crosscourt. If you end up going straight down the middle or down the line, at least make sure you hit your shot deep so you are not left vulnerable at the net.

Once you make contact with the ball, be sure to fully follow through. You want to swing across your body so that you generate as much power as possible. Do not slow down the motion of swing until after you cross your body.

Finally, after you have completed the swing, you want to get back into the ready position. While the aim of the shot is to finish off your opponent, if they manage to return the ball you will be ready to return their shot as soon as you are set.

Whatever you do, don’t pause to admire your shot. This is a very common mistake. Get back into position, anticipating that your opponent will manage to return the ball, and be ready for your next shot should you need it.

The overhead smash is a shot that can feel exhilarating to hit when well executed. However, missing an overhead shot can feel outright humiliating. It is one of those shots that you are supposed to make.

In order to reduce the likelihood of missing your shot, tune out your opponent, and focus on your shot and technique. Following your opponent as you go through the motions will only serve to distract you.

As long as you place the ball deep into your opponent’s side, you will be ahead of the game. In fact, it is better to miss your shot long than to hit a short and weak smash shot that allows your opponent to return the ball.

Hit the ball with pace and conviction. Don’t allow yourself to be distracted by either your opponent or your own fear of missing. You don’t necessarily have to swing all out. As long as you put your weight into the shot and step into the ball, you’ll create enough pace behind your shot.

As noted earlier, you want to execute the shot close to the net if possible. If you get caught having to hit your smash shot further back, near the baseline, remember that the stroke is similar to a serve and you actually have added distance to make your shot.

Like every other shot in tennis, the more you practice the shot the better you will become at it. Find a hitting partner to feed you some lobs while at the net and practice the swing motion.

Practice hitting your overheads both with and without a bounce. Have your partner feed you some deep lobs and some shallow ones and vary the location from side to side. You want to make sure you experience all the various angles and distances you’ll need to cover during a match.

When you practice the stroke, try to aim your balls deep. This is an opportunity to practice the shot in a non-stress situation, so you should not be afraid to hit your shots long. Eventually, you will adjust your stroke so that the ball lands consistently within the baseline.

With enough practice and repetition, the overhead smash will become second nature and may very well become of your favorite shots to use when presented with the opportunity. It’s a great feeling to really blast the ball for a winner, just be sure to use proper form.